In the fall of 2003, we were contacted by an individual in South Carolina who claimed that he was in possession of a wooden trunk that had been owned by Lt. Charles T. Watson, the quartermaster of the 3rd Maine from June, 1861 to June 1864. Examinations of photos of the trunk and a little research revealed that the item had indeed belonged to Lt. Watson. The trunk had received some damage from use as a piece of furniture and from Hurricane Andrew. Charged with preserving Maine's Civil War history, the members of the current 3rd Maine negotiated to purchase the trunk and bring it home for the people of Maine. We ultimately decided that the trunk would be most safely preserved and available for the largest number of people to see if it were turned over to the Maine State Museum in Augusta. In June, 2004, Lt. Watson's trunk was donated to the Museum for preservation and display.

Lt. Charles Watson was from Bath, Maine and was only 22 years old when he volunteered. He died on May 9,1913, in Ballston, New York. After his death, his remains were shipped home to Bath and buried in the Oak Grove Cemetery. 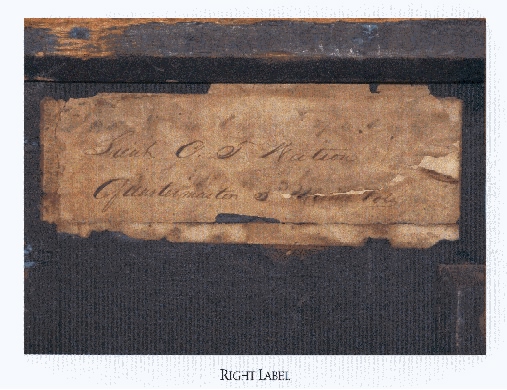 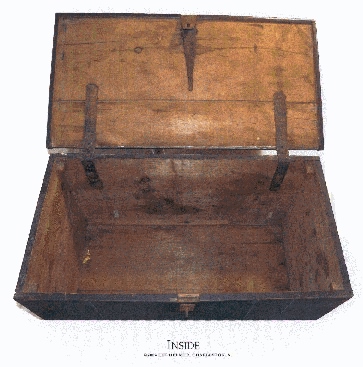 The Maine State Museum placed Lt. Watson's trunk on display in the Museum's front entrance in August, 2005. The trunk will be one of the few Civil War artifacts on permanent display.

For those who may wish to build a replica of the trunk, the measurements are 35.5 in. long by 18 in. wide (outer dimensions of the lid and base) by 20 in high (from the base to the top of the lid). Tight dovetailed joint construction was used and it appears that the top, bottom, front, back, and sides of the trunk were built from single planks of 0.75 in. thick wood. (Some surface cracks developed over time.) The lid extends over the front and sides by about 0.75 in. and is flush with the back. 3.25 in. high strips of beveled 0.75 in. thick wood surround the outside of the base. The configuration of the internally mounted iron hinges, the hasp, and the rope handles on the sides can be seen in the photographs.


Charles T. Watson was buried in a family plot in the Oak Grove Cemetery in Bath, Maine.